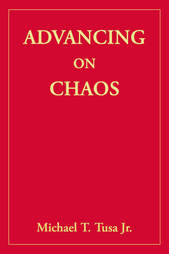 Advancing on Chaos
A theological clash threatens to mar the yearly Southern Decadence festival in New Orleans. Reverend Jessie Ray Elder makes a point of annually protesting the LGBT festival. His dogmatic and rigid views have driven his wife, Madeline, away from their Evangelical church. But Elder ignores her advice and remains committed to his cause because he thinks he’s ridding the city of devilish influences. This year, a rival—the homeless former English professor, Zarathustra the Second—publicly challenges Elder. As befitting his name, Zarathustra the Second treats Nietzsche’s Thus Spake Zarathustra as his personal bible. Like his idol, Zarathustra the Second believes God has disappeared and seeks to convince others of this fact. Elder is outraged when Zarathustra’s antics divert media attention away from his own protest. To add insult to injury, Zarathustra names Elder’s son, Nicholas, as his first apostle. When Zarathustra the Second predicts that New Orleans will be destroyed by a hurricane, both his and Elder’s faith in their beliefs are put to the ultimate test. In this wickedly funny, thought-provoking novel, no one, religious or secular, is safe from critique.
​The Online Book Club reviewed the book and wrote: "This is one of the most enlightening books I've come across in a long time...." https://forums.onlinebookclub.org/viewtopic.php?t=4235#top
Reviewers commented as follows:
"Just fascinating. I would recommend this book to anyone who wants to know him or herself better and know why they believe what they believe."
"A story that shows how different people's views can be and how they arrived at their ideas of truth."
"This would be an excellent book to examine in a philosophy class."
"...reminiscent of and second only to Confederacy of Dunces. High praise, indeed."
"Very thought provoking book."
"Excellent book."
"What an intriguing novel!" 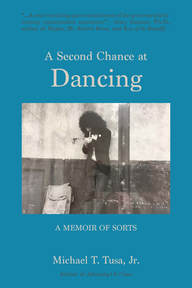 A Second Chance at Dancing
​    Michael has no memory of his childhood. Deeply intellectual but emotionally choked he’s forced to wrestle with his unresolved past when he loses yet another lover in a string of failed relationships. After initially resisting he tried to piece together his history with the help of his best friend Caroline. He grapples with the stress of his career as a lawyer, the escape provided by the barroom, and his inability to control a growing unfocused anger. Caroline, a Christian, and Michael, an atheist, spend hours bumping heads over religious issues and meaning. Although Michael remains a non-believer, it is an act of God that finally opens his heart.
​Reviewers commented as follows:
"This is a beautiful and tenderly written story about a young boy who suffered physical and emotional trauma that resulted in deeply repressed memories of childhood."
"A very interesting and worthwhile read."
"The author and protagonist unflinchingly pursue authenticity and integrity as he confronts his past and articulates his ideology."
​"I hold this book as the gold standard for the measure of the quality of my own self-examination."
"This book is so rich in content that I really did not want it to end."
​The Online Book Club reviewed the book and "recommends the book to all fans of memoirs..."                                                                                      https://forums.onlinebookclub.org/viewtopic.php?f=24&t=118404 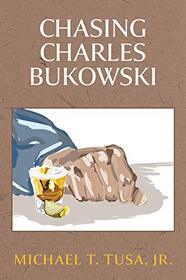 Chasing Charles Bukowski
Alternatively set in the poor town of San Lorenzo and in the City of New Orleans, Rojas, Maximillian, Claudia, Maria and Mire seek to uncover the secrets of happiness in vastly different ways. Maximillian escapes his poverty through the dream world of his imagined secret agent alter ego, while Rojas offers folk philosophy to those who hold him in high esteem for his role in the revolution. Claudia and Maria pursue their own agendas, some legal some not, as Mire tries to change the narrative that has always defined him. But no one can predict where their different paths will take them in their search.
Reviewers commented as follows:
"I recommend it highly if not just for the insight into other ways of life."
"Ride along with the journey and you to may discover soemthing for yourself."
I laughed...teared up...and it always made me think."
"Tusa's gift for character development and intertwining storylines is apparent in Bukowski."
"Fast pace and interesting characters made this book for me."
​
The novella version of Chasing Charles Bukowski was short listed for the 2018 Faulkner/ William Wisdom Creative Writing Award.  The novel was a finalist for the 2019 Faulkner/William Wisdom Creative Writing Award and was short listed for the 2019 Somerset Awards sponsored by Chanticleer Books. 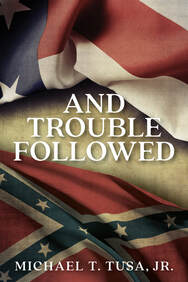 And Trouble Followed
In this work of historical fiction, set in 1868 during the Congressional Reconstruction period, four Union soldiers are finally discharged from the Army. They had been in many Civil War battles together, creating an undeniable bond, and then they jointly decided to extend their enlistments, ending their service in the Third Military District, one of five such districts set up by Congress in the defeated Confederacy.
Uniquely, the four soldiers, Dalton, Harrison, Shadrach, and Emmet, are two white men and two black men. Shadrach and Emmet are former slaves who joined the Union Army after fleeing the plantations and after blacks were allowed by Congress to serve. Dalton lived on the streets after his parents died and before he joined the Army. Harrison was an abolitionist and a preacher’s son who intends to return to the ministry. With their military service ended they struggle with saying goodbye to each other knowing it is unlikely that they will ever meet again but promising to keep in touch. The men then head their separate ways to different parts of the country to try to forget the trauma of the war and create new lives, but in a world still shattered by disunion, trouble followed.

Reviewers commented as follows:
"The author does an awesome job of portraying the similar union I have often heard veterans communicate regarding fellow soldiers and the brotherhood it forms."
"I really enjoyed the history and information provided...."
"I highly recommend this book to anyone willing to explore the Reconstruction era while enjoying the ride of a fantastic story."
"The historical research that went into this story of friends is remarkable."

The book was long listed for the 2019 Laramie Awards by Chanticleer Books, was a finalist for the 2020 Faulkner/William Wisdom Creative Writing Award and is a finalist for the 2022 Eric Hoffer Award. Read the review recommending the book from US Reviews:
https://www.theusreview.com/reviews-1/And-Trouble-Followed-by-Michael-T-Tusa-Jr.html#.YpZV68PMIkI